Polio – Another triumph for Rotary

Rotary and its Global Polio Eradication Initiative partners have announced that wild polio virus type 3  has been certified eradicated worldwide. This achievement means that two of the three wild polio strains have now been wiped out. 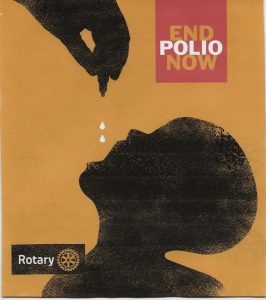 Since 1985, Rotary’s key humanitarian priority has been to rid the world of polio. From over 1000 cases a day in 125 countries, paralysing and even killing children, that number is today down by 99.9%.

Over the last 30 years Rotary has donated US$2 billion to the eradication effort, protecting more than 2.5 billion children from the disease through vaccination programmes.

Inspired in part by Rotary’s volunteer commitment and fundraising success, the Global Polio Eradication Initiative was launched in 1988. This partnership brought together Rotary, the World Health Organisation, UNICEF and, more recently, the Bill & Melinda Gates Foundation.

1988 was also the year Harpenden Village Rotary Cub was chartered. The club has been a major supporter of the initiative, earning it the Rotary International award, pictured on Homepage.

Despite there being only a handful of cases still occurring, the campaign continues. Failure could result in 200,000 new cases worldwide every year.