Speaking across the divide 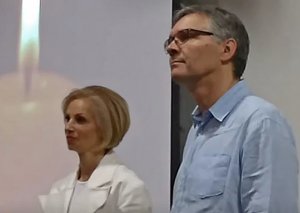 The talk ended. The President called for questions. But for a full two minutes there was no response. We were all still trying to absorb what we had heard from two speakers who could not be more different: the daughter of Holocaust survivors and the grandson of an SS officer.

Neomie Lopian related harrowing tales of her own and her parents’ experiences as Jews living in German-occupied France. She quoted from her father’s graphic book, The Long Night.

British-born Derek Niemann, a writer and author, decided his German ancestry was a subject worth exploring. His discovery that his grandfather was an SS officer and had used slave labour for Nazi purposes in nine concentration camps made him realise how easy it was for basic human failings to lead us into terrible actions.

Neither speaker resorted to drama in relating their stories nor in their answers to the many questions that ultimately came in a rush. Their calm delivery underlined how they had come to realise that they shared the same goal: to inform people of the perils of extremism and the ways reconciliation and peace, coupled with international understanding of past atrocities, can be fostered.

Since 2018 they have talked at schools, universities and synagogues, and given presentations to the Cabinet and other government departments. This was their first talk to a Rotary Club and drew our largest audience of members and guests for a Zoom meeting.